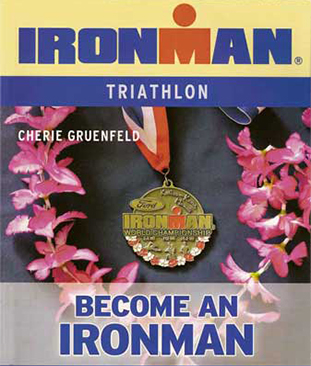 BECOME AN IRONMAN is a treasure trove of deeply insightful training and racing wisdom hard-won during the course of triathlete Cherie Gruenfeld's 28-year IRONMAN career. Its purpose is to provide the reader with a rich collection of insider tips, technique and expertise.

Cherie Gruenfeld raced her first IRONMAN at the age of 48 and went on to become one of the most celebrated master's triathletes in the world. She has won her age group at the IRONMAN World Championships in Kailua-Kona, Hawai'i , thirteen times and was the first woman over 55 to break the twelve-hour barrier. In 2000 she was honored by the World Triathlon Corporation as its Female Age Grouper of the Year and was named by USA Triathlon as the 2007 &2014 Grandmaster of the Year.

“There are many books out there, but none of this quality. Gruenfeld’s deep love of this sport comes through on every page. She’ll make you fall in love with it, too. If this book doesn’t make you want to try an Ironman, nothing will.”

“No matter if you are an Ironman virgin or a veteran, this is a must read. Cherie puts you inside the heart and soul of Ironman. Thanks, Cherie, for sharing your passion and helping all Ironman athletes get to the finish line.”

“As a 7-time Ironman World Champion, a coach and a wonderful woman, Cherie is the best person in the sport to speak of this race. This book is a joy to read. It offers the perfect balance of clear, practical data along with electrifying inspiration.”

BECOME AN IRONMAN on Amazon